It is Good to be Children Sometimes | by Tom Bassford 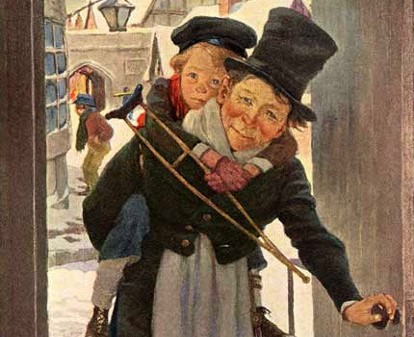 Coffee, beer, brussel sprouts; those are things that I now love but for which I had to acquire a taste.  There are many things over the course of one’s life for which they acquire a taste and come to love. For me, Christmas is not one of them.  Except for one very troubling year of my life I have always looked forward to its coming and all but mourned its leaving.  To say that I have cultivated an appreciation for the season would be like saying I have cultivated a love for pecan pie.  Nothing could be more untrue.  Like pecan pie, I simply cannot help but love Christmas.

I will admit traditions like gift-giving, Santa Claus and flying reindeer helped to embed the season in a one-of-a-kind place in my childhood heart but even then there was an echo of something more. Not something else but something more.  I am of the opinion that Christmas, like childhood, is something to grow into not out of.  Surely that’s what Jesus was getting at when He said, “Unless you change and become like little children, you will never enter the kingdom of heaven.”

If that be so, then what we first experienced in the best that we remember (and longed for) in our childhood, and especially in Christmas, is but an echo calling us “further up, further in!”  I first recognized that echo of something more the year my fifth grade teacher read O. Henry’s “The Gift of the Magi” and my young heart was both startled and stirred by a picture of love and gift-giving I had never imagined before.  The worries and disappointments of life may well cause us to forget or even doubt the wonder and magic we once knew but somewhere in the recesses of our hearts and minds we still know it exists.  Not as something to get back to but as something to grow into.

I recognized that old magic in the sights and sounds of my own children as they were growing and now again in my grandchildren.   I can easily hear the echo in “A Christmas Story” with Ralphie’s all-consuming wish for that Red Ryder BB gun that will most assuredly put his eye out.  That was me! And in some ways it still is… and I mean for it to remain me until I sing my last “Away in a Manger” many years from now.

So it should be no surprise that Charles Dickens’, “A Christmas Carol” would be to me the pinnacle of Christmas as a thing that we might grow into even as adults.  I love everything about the story but it’s the nephew’s words to his Uncle Scrooge that once again startled and stirred my heart to a greater height and appreciation of what Christmas can become.

“But I am sure I have always thought of Christmas time, when it has come round … as a good time; a kind, forgiving, charitable, pleasant time; the only time I know of, in the long calendar of the year, when men and women seem by one consent to open their shut-up hearts freely, and to think of people below them as if they really were fellow-passengers to the grave, and not another race of creatures bound on other journeys. And therefore, uncle, though it has never put a scrap of gold or silver in my pocket, I believe that it has done me good, and will do me good; and I say, God bless it!”

See what you will and say what you must about the commercialization of the season.  For me, I continue to see what the nephew saw and I would argue it is as easy to see as the other and much more beneficial.  It really is the one time of year, “when men and women seem by one consent to open their shut-up hearts freely, and to think of people below them as if they really were fellow-passengers to the grave, and not another race of creatures bound on other journeys.” And that deserves more than a passing glance.

I learned some things this year about Dicken’s and the story behind the story that brought it even nearer to my heart.  Apparently Dickens had recently read a report on child labor in the UK documenting its horrific practices.  Eight year olds working 11 hour days pulling coal carts through underground tunnels was common.  Employers had begun to see their employees as mere commodities and the workhouses Scrooge so readily invoked as the answer for the poor were real.  When Scrooge so blithely suggests that the poor should starve and thus “decrease the surplus population” he was merely stating the popular opinion of the Rev. Thomas Malthus.  The “Malthusian Theory,” as it came to be known, held the belief that the only way to deal with the poor was to let them die and in so doing a society would restore the balance between a population and its available resources.

Dickens was not just writing a sentimental story about Christmas, he was weighing in on a debate that is as relevant today as it was then.  How should we see the poor and what can we do to help them?  To see the poor as “fellow-passengers to the grave and not another race” was his suggestion.  The poor are individuals endowed with creative capacity and made in the image of God, protagonists in their own stories!  Not mere cogs in the business dealings of the well to do.  Like Bob Cratchit, they have families and dreams and carry with them the crushing burdens of their own Tiny Tim’s.  Until we see the poor as our business we cannot help and, in fact, we miss the point… not just of business but of life itself.

“Business!” cried the Ghost, wringing its hands again. “Mankind was my business; charity, mercy, forbearance, and benevolence, were, all, my business. The deals of my trade were but a drop of water in the comprehensive ocean of my business!”

And here again I hear the echo of Christmas.  Only this time not in the innocent wishing’s of a 10-year old boy hoping for a BB gun but in the desperate longings of a loving father or mother wanting to provide for their own family?  How do you wrap the gift that satisfies that longing and put it under a tree?  These days I think of how we can really help the poor in lasting ways with as much wonder and imagination as I ever did for a BB gun.  That’s where Christmas, in its gently ascending climb, has led me to at this stage in my life.

It’s a good place to be actually.  And I am finding more and more people sharing the same space; people asking how the church can make the poor “their business.”  Not so much as objects of our charity or pity or even compassion but as full participants in their own journey.  We were fortunate this year to have another great line-up of speakers at SATtalks including both Bob Lupton and Don Larson who talked about this very idea.  Both men shared the role that business, job creation and business people are playing in the realm of church missions across the world today.  Take a look at their talks and I think you will find reason to be encouraged.  By thinking differently and ultimately working differently with the poor there are those who are helping mothers and fathers fulfill their greatest Christmas wish…to provide for their own families.

It was easy to believe in Santa Claus as a little boy and that was a good thing because we become incapable of believing in almost anything soon enough.  Santa Claus taught me what it was to believe in the fantastic and the impossible even apart from having all the answers.  Life has taught me that most impossibilities are made possible through hard work that begins in imagining a different reality.  But it is a child-like belief and imagination that keeps us going.

We continue to forge ahead in the belief that the church can be a major force in helping the poor lift themselves out of poverty.  And, as with all of life’s greatest challenges we do so with the help of a child-like belief and the imagination to shape a new reality.  “For it is good to be children sometimes, and never better than at Christmas, when its mighty Founder was a child Himself.”

Bob Lupton is a Christian community developer and entrepreneur who brings together communities of resource with communities of need. Lupton has invested the past 43 years of his life in inner-city Atlanta where his life’s work has been the rebuilding of urban neighborhoods where families can flourish and children can grow into healthy adults.  He has authohred numerous books such as “Toxic Charity” and, most recently, “Charity Detox,” challenging the church to face the unintended consequences of  its efforts to serve the poor out of poverty.

In his SATtalk Bob describes two types of players in our economic system: wealth creators and wealth processors. Care for the poor has been funded by wealth creators while wealth processors perform the hands-on work. This arrangement has largely failed. He agrues, the poor cannot be served out of poverty. Instead, they need jobs that pay a livable wage. The new missionaries of the 21st Century will be wealth creators, willing to make money “with” the poor.

Former Hershey exec, Don Larson says, “Find an idea that you’re willing to die for…and then start to really live.” After selling his possessions and moving to Mozambique to open a cashew company with a strong social mission, Don almost lost his life. That event and a deep sense that God has called him to this work has galvanized him to be even more resolute in building a company that helps transform the lives of his workers and those in his community.

The solution to many of the world’s problems is jobs.  The Sunshine Nut Co. was founded on the belief that a value driven business – where dignity, love, and community come together with excellence could provide lasting social, economic and even spiritual change in some of the poorest countries around the world. Don is convinced there are many Christian businessmen just waiting to be challenged by their church to become what he calls “Economic Missionary Warriors.”